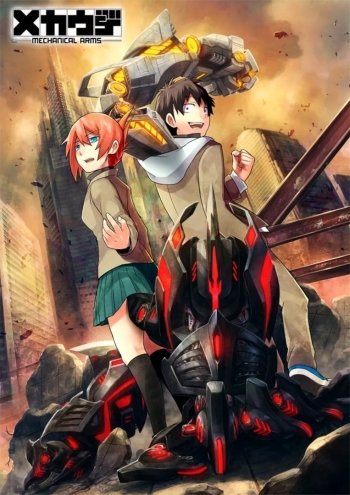 Hero was a high schooler living an ordinary life. One day, he meets a very strong and intelligent mechanical arm named "Mecha-ude". After a strange turn of events, the "Mecha-ude" started living inside Hero's hoodie and the two's life full of trouble begins. As the boy and his "Mecha-ude" fights together and strengthen their bonds, the two also meets new friends who also fights along with each of their own unique "Mecha-ude" partners. Out of those, one of the heroine has two "Mecha-ude" which appears out of her skirt. An active girl with a totally opposite characteristics from hero himself, he gradually becomes attracted to her. But the two are confronted with other "Mecha-ude" users who are in search of the secret of "Mecha-ude" relentlessly. (Source: kickstarter)
TV Show Info
Franchise: -
Status: Ended