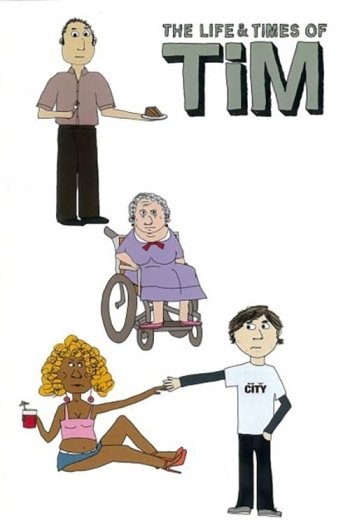 The Life & Times of Tim

The Life & Times of Tim is an HBO comedy animated television series, which premiered on September 28, 2008. The series was created by Steve Dildarian, and is about a hapless man in his mid-20's named Tim who lives in New York City with his girlfriend Amy. Throughout the series, Tim constantly finds himself in increasingly awkward situations in both his work and personal life. The first season aired in 2008 and has since been aired in numerous countries, and has developed a cult following. The second season debuted on February 19, 2010 on HBO. On June 4, 2010, HBO announced it was canceling the show. There were rumors that it was going to be picked up by another network. On the 16th of August, 2010, it was announced HBO had reversed their original decision to cancel the show, and as a result, a third season was ordered. Season 3 of The Life and Times of Tim premiered on December 16, 2011. The first season was released on DVD on February 9, 2010, the second season was released on DVD on December 13, 2011, and the third season was released on DVD on December 18, 2012. On April 20, 2012, HBO cancelled the series after three seasons. The theme song is "I'll Never Get Out of This World Alive" performed by country music star Hank Williams.
TV Show Info
Franchise: -
Content Rating: TV-MA
Status: Ended
First Air Date: 2008-09-28
Last Air Date: 2012-02-17
Number of Seasons: 3
Number of Episodes: 60
Episode Length: 12
Network: HBO